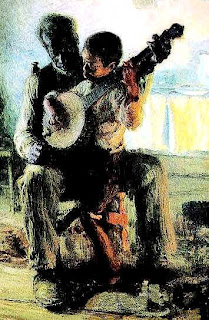 The "Negro Spiritual" was a song created by American slaves before emancipation, or a subsequent arrangement of such a song.

Because they were unable to express themselves freely in ways that were spiritually meaningful to them, enslaved Africans often held secret religious services. It was there that enslaved Africans also further crafted the impromptu musical expression of field songs into the so-called "line signing" and intricate, multi-part harmonies of struggle and overcoming, faith, forbearance and hope that have come to be known as "Negro Spirituals".

The Christian principles that teach those who suffer on earth hold a special place with God in heaven undoubtedly spoke to the enslaved, who saw this as hope and could certainly relate to the suffering of Jesus. For this reason many slaves genuinely embraced Christianity.

But while slaveowners used Christianity to teach enslaved Africans to be long-suffering, forgiving and obedient to their masters, in Black hands and hearts, Christian theology became an instrument of liberation.

Spirituals sometimes provided comfort and eased the boredom of daily tasks, but above all, they were an expression of spiritual devotion and a yearning for freedom from bondage. Songs like Swing Low, Sweet Chariot, raised unexpectedly in a dusty field, or sung softly in the dark of night, signalled that the coast was clear and the time to escape had come. The River Jordan became the Ohio River, or the Mississippi, or another body of water that had to be crossed on the journey to freedom.

Choral conductor, composer and arranger Hall Johnson wrote that the spiritual is the only genuine home grown creative art-form to come out of the new world.

Samuel Floyd writes that “they are… chronicles of the black slave experience in America … for they record the transition of the slave from African to African-American, from slave to freeman, and the experiences that the African underwent in the transition ….”

As traditional negro spirituals continued to be sung, new Gospel songs were created. The lyrics of these songs dealt with praising the Lord, with personal improvement and with brotherly community life. Many of them were inspired by social problems: segregation, lack of love, drugs, etc.

For the struggle for Civil Rights, in the 1960s, negro spirituals like We shall overcome, Oh Freedom and This Little Light of Mine used to be sung.

Sometimes the words of traditional negro spirituals were slightly changed and adapted to special events. For example, the words of “Joshua Fought the Battle of Jericho (and the walls came tumbling down)” were changed into “Marching ‘round Selma”.

One of the sources of modern black gospel music was the black "jubilee" groups that were formed in colleges primarily located in the Southeast United States in the early decades of the 20th century. These groups employed quartet singing with four-part harmony.

Here is Swing Low, Sweet Chariot performed by The Southern Four, recorded in 1921.