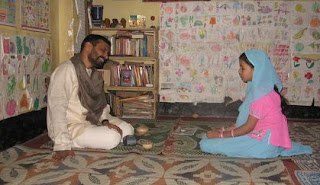 Yusuf Islam's recitation of the Fatiha.

Hear / download my rendition of the Fatiha here (MP3).

Among followers of the Islamic faith, any good task, any auspicious occasion, is marked by the recitation of the Fatiha. The Fatiha is considered the distilled essence of the whole Koran. When we inaugrated our office-community centre in PM Basti in early 1998, as we were amidst and working with a Muslim community, we organised a Fatiha recitation ceremony.

After the Talimi Haq School was started in 1998 in Priya Manna Basti, Howrah, the teachers began the classes every afternoon with the students standing and reciting the Surah Fatiha, or the first chapter of the Koran, whose title means “the opening”.

With the daily recitation of the Fatiha, the phonetic sounds were instilled in my mind. When I was in Jerusalem in late 1998, hearing Arabic spoken around me, I remembered the Fatiha and was eager to know what exactly this meant. When I visited my friend Prof Marwan Haddad in Nablus, he gave me a set of children’s Islamic education CDs for our Talimi Haq School.

Back in India, I began listening to one CD in particular, which taught the correct pronunciation and recitation style of several verses from the Koran. I listened to the Fatiha, again and again and again, until I knew it thoroughly and had mastered it. I also referred to the English translation and internalised the meaning of each word, so that it could be expressed in a manner that conveyed the meaning and tone of this verse.

Some years earlier, I had set to melody a traditional Hindu prayer (in Sanskrit) to Ganesa, the Lord of Obstacles. In Hindu custom, any good task, any auspicious occasion, is marked by the recitation of a prayer to Lord Ganesa. So after I had learnt the Fatiha, I sought to fit this to that same melody. I felt there was an underlying oneness in the conception, intent and meaning of the prayer to Ganesa and the Fatiha. I was soon able to render the Fatiha in this melody.

Visiting Jerusalem again in early 2003, I met another friend, Omar Youssef, an architect-planner. Omar is also an accomplished player of the oud, a Middle Eastern string instrument. So Omar and I shared our music and songs. He also took me meet his friends at the Naqleh Esheber centre in Beit Hanina. This is a well-known organization involved in social communication with youth. Naqleh Eshaber is an animated character created by them for their programmes on social and environmental themes; he is thumb-sized, but with a heart as large as the heavens!

As someone born in a Hindu family and now adhering to no particular faith, I was a bit wary about singing the Fatiha in front of practicing Muslims in the Middle East. But their response was very positive! I was overjoyed!

Before I returned home, I visited the Naqleh Esheber centre again with Omar. This time there was also a group of teen boys and girls, and I shared my Fatiha composition with them; once again, with very positive response.

Listening to Omar’s accompaniment on the oud – I got a completely new turn to my melody, and this was resonating in my head.

When I returned to Calcutta – I learnt that a close friend, Dayan, had been killed in a car crash. I was devastated. Before I had left, Dayan had helped me to record some of my songs, including the Fatiha. We were supposed to do a final version. But that was not to be.

Dayan had shared my Fatiha song with his parents (his father is Shia, mother Sunni). So when I went to visit them they asked me to sing this. After the new turn given by Omar’s oud, and now this tragic setting: my melody took a further new turn. The grief-stricken heart plaintively submits to the dictates of the Almighty.

I sang the Fatiha at Dayan’s memorial gathering.

In 2005, I sang the Fatiha for Imam Muhammad Ashafa, from Nigeria. He told me he was an examiner of students in Islamic seminaries, and said he would give me 88 out of 100 for my recitation! And after hearing me sing the Fatiha at the Talimi Haq School in February 2007, blogger Sadiq wrote: "... when you were reciting the Fatiha, I was crying. ... that's the best i have ever heard in my entire life."

have u ever heard a qari reciting this.it moves the soul in you.but sorry to say this rendition is the worst i have ever heard in my life.maybe its becoz u have added the melody of ganesha's prayer or the reason maybe that u are not well versed with arabic language.

this recitation is not that good brother...i am sorry if i hurt ur feelings....
may Allah subhanuwatala bless u and keep u

I agree with Anonymous. 'worst' indeed. Geez Manish. May the Lord bless you with an improved sense of poetry, tela'wat or recitation, music created by the marriage of words with the honey-filled loci of sounding 'syllables'.
Or just the courtesy to never defile a Masterpiece again.

Similarly-
"Go, go, go perfectly and completely to build the path for enlightenment."

-This is the Mantra in Japanese