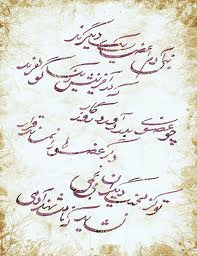 Recently a song was cooking within me.

This is a poem by Saadi, the great Persian mystic, poet and thinker of the 13th century, on the indivisibility of humanity. Raya, a neice of mine, who is Iranian, had put up the calligraphed Farsi lines on Facebook, together with a nice translation in English.

Human beings are members of a whole,
In creation of one essence and soul.

If one member is afflicted with pain,
Other members uneasy will remain.

If you have no sympathy for human pain,
The name of human you cannot retain.

Transcribing the Farsi in Roman:

I was taken by this, especially that they said virtually exactly the same thing as another song I had composed with lines by Shantideva, the great Buddhist monk and teacher, who lived several centuries before Saadi. I thought I should take this and add it to my small collection of songs and chants based on sacred texts.

My neice also directed me to a YouTube video of a song by Shakila, a Farsi singer, singing a song based on similar poetry. I heard that a couple of times. That was in mid-March.

I also happened to hear this awesome Farsi song, also a composition of Saadi, by Ostad Mohammad Reza Shajarian and Homayoon e Shajarian.

Soon afterwards, I met Dr Siddiqui, the anthropologist, who knows Farsi, and got the exact sound / pronunciation and meaning of the Farsi lines. I noted it all down in my pocket note book. A few times, I would open the notebook to the page, and go over the lines, trying to learn them, trying to say them out with a smooth flow of the words. Not happening. Then some weeks later, alone at home, in the quiet stillness of mid-morning it was as if a faint melody entered my ear from nowhere. So as not to lose it (I do not know how to note down music), I recorded it in the voice recorder in my cellphone. That was in mid-April. I played and listened to the melody recording a few times.

Last Sunday, in the evening, as I was idle, I just picked up the notebook, and in a few minutes it was all over, the mastery over the words threaded by the melody, reciting it confidently and smoothly, singing it, inserting inflexions, everything was done. 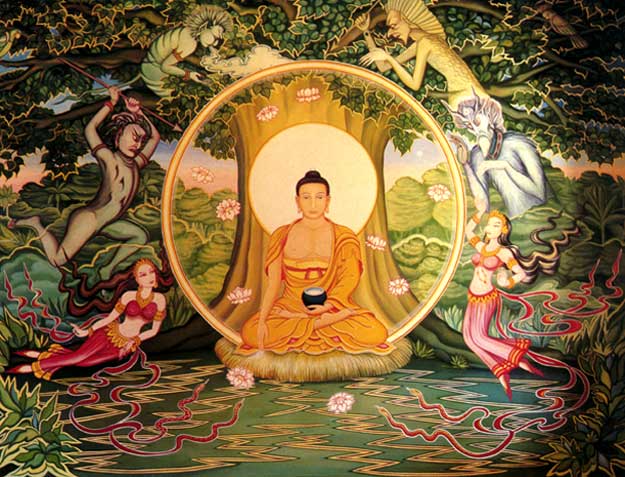 This is the Buddha's exclamation on attaining enlightenment, in Pali (written above in the Devanagari script), from The Dhammapada, Ch. 11, "Old Age", 153-54.

Read about the life of the Buddha here.

I, who have been seeking the builder of this house, failing to attain Enlightenment which would enable me to find him, have wandered through innumerable births in samsara. To be born again and again is, indeed, dukkha!

Oh house-builder! You are seen, you shall build no house again. All your rafters are broken, your roof-tree is destroyed. My mind has reached the unconditioned; the end of craving has been attained.


Hear / download a guide to singing the Pali verses here.

... Thus Life's thirst quenches itself
With draughts which double thirst, but who is wise
Tears from his soul this Trishna, feeds his sense
No longer on false shows, files his firm mind
To seek not, strive not, wrong not; bearing meek
All ills which flow from foregone wrongfulness,
And so constraining passions that they die
Famished; till all the sum of ended life -
The Karma - all that total of a soul
Which is the things it did, the thoughts it had,
The 'Self' it wove - with woof of viewless time,
Crossed on the warp invisible of acts -
The outcome of him on the Universe,
Grows pure and sinless; either never more
Needing to find a body and a place,
Or so informing what fresh frame it takes
In new existence that the new toils prove
Lighter and lighter not to be at all,
Thus "finishing the Path;" free from Earth's cheats;
Broken from ties - from Upâdânas - saved
From whirling on the wheel; aroused and sane
As is a man wakened from hateful dreams.
Until - greater than Kings, than Gods more glad! -
The aching craze to live ends, and life glides -
Lifeless - to nameless quiet, nameless joy,
Blessed NIRVANA - sinless, stirless rest -
That change which never changes! 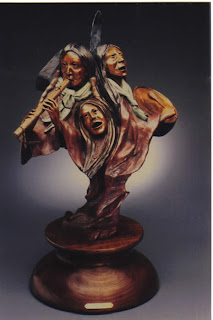 To commemorate this day, I have created this Sacred Songs site. I like to think that sacred chants and songs are the soil of which all melody and singing are formed.

I have no musical training or knowledge. But from an early age, I have heard, loved and sung all kinds of songs. I started composing and singing devotional songs and chants in 1995, and as I was also studying sacred texts from different faiths, I also began setting to melody verses from sacred texts. All the songs from across the world, all the texts of different faiths, only harmonised in my consciousness.

Sacred songs - was a very personal engagement for me, something deeply fulfilling, in itself. I felt I was essentially a minstrel. I had the opportunity to share my songs with small audiences in different places, and was encouraged by their appreciation.

I wanted to share my small repertoire of songs through the internet, but with none of these having been properly recorded, and having been unable to find other musicians to help me make something of the songs - I shall try to present songs and chants in others' voices.

The songs I put up - are limited by my own (aural) awareness, and what's availabile (or rather, what I was able to find) on the internet. This is a tiny, personal compilation. All kinds of sacred songs, chants and expressions, of different faiths and peoples, are absent here. So I hope this site will be a means for me to grow in every way.

I hope singers and musicians would find this of interest. But more than that, I wish hearing these songs would enable ordinary people to feel roused, and sing. I have tried to accompany the various songs with some explanation, plus the lyrics, transcriptions and translations wherever possible.

I wish families, and friends, will find particular songs that they like, and want to learn and sing / perform these together.

This site's existence is entirely dependent on a vast web of resources, shared altruistically by so many organisations, enterprises and individuals. Hence I cannot but express my gratitude to all of them. I would be glad and grateful to get comments, suggestions and advice from visitors to this site.

May all living beings, everywhere, be well!

Here's a prayer for Peace (Shanti).